The Determining of Color: How is Color Perceived Around the World? 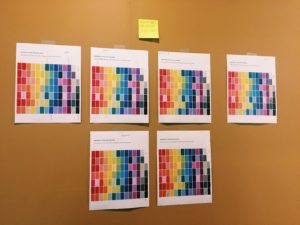 Have you ever heard of Paul Kay and Brent Berlin? In the 1960s, they conducted a study based off a simple color assessment, which involved twenty individuals having to identify 330 color chips by name. Their theory was if a specific language has a certain number of color words, you could determine what those would be easily, for example:

But stipulations arose, as not all languages perceive color the same way, visually or grammatically, as the English-speaking language does. Less industrialized countries that have fewer color words use more ‘descriptive’ words instead, such as languages that only have color words for shades of blacks, whites, and reds. Typically, the rest of the colors are depicted as other descriptive items, such as the sea, grass, trees, or sky.

If you noticed, most of those descriptive colors are all cool colors, the hardest to describe and differentiate. They can all be seen as  ’background’ colors. More ‘foreground’ colors we see are warmer tones, such as fruits, animals, skin, and hair.

English speaking and industrialized countries have eleven color names: black, white, red, green, yellow, blue, brown, orange, pink, purple, and gray. Russia has twelve, as they split blue into light blue and dark blue. But there are specific languages in the world, like Wobé of Côte d’Ivoire, that have only three words for color. Now you might be wondering, why is having a name for red more common than blue? Some people argue that red is in more ‘naturally forming’ things in nature in comparison to blue. Berlin and Kay argued that certain colors, such as red, white, and black, are more salient, or more noticeable, or important.

Another reason could be that the warm colors, such as red, orange, and yellow, are easier to convey efficiently than the cooler colors, such as blue. With all that being said, we here at TM decided to have our own take on hypotheses ourselves!

We gave all seven employees here a 98 color chip sheet and asked all to label the 11 English color names. The hypothesis was that we would unknowingly guess the same colors in a similar order of Paul Kay and Brent Berlin’s theory: Black, White, Red, Green, Yellow, Blue, and the rest would follow. The results of our in-house test were actually very close to the original study.

# of matching color chips we said were the same color:

As you can see, our results matched the hypothesis of order almost to a tee. But to our surprise, the next most was purple, which is typically farther down the list of color names.

We all have a tendency to take for granted that the words that we use are understood universally as meaning the same thing to everyone. In reality, though, there are many words that can and do mean vastly different things to different people, with color being a prime example.

Here at Transformation Marketing we are currently in the midst of designing several websites and, as we work through the design discovery phase with our clients, we often hear words like ‘professional’, ‘upscale’, ‘sexy’, and ‘dynamic’ to describe the look that they would like to achieve – once we even had someone tell us that they wanted their site to look more ‘glossy’. With all of that in mind, we challenge you to ask yourself the following (just like we did with the color quiz we took here at the office): what do you visualize with each of those descriptive words listed above? Does a ‘professional’ looking website (or logo or ad or any other design piece) mean something specific to you in regards to a particular selection of colors, or how a font is utilized, or does it mean that you prefer the incorporation of professional stock photos instead of company photos or icons?

We had a client years ago that sold tools and he wanted his site to be ‘sexy’ so that it would appeal to his predominately male audience. Needless to say, there was some unpacking involved to understand his usage of that word – to him, a ‘sexy’ website meant that it had sleek lines. In another instance, we discovered that when someone was asking us to make something more ‘professional’ looking it meant that they wanted us to use drop shadows all throughout their design. In either of those instances…who would have guessed?!

All this to say, that perception plays a big role in how we communicate – be it describing colors or most anything else – and communication can be challenging because of that factor. So the takeaway from this intriguing blog topic and our internal poll is to show that it is important to take the time to clearly communicate the desired outcome before you set a design team free to work off their own independent perceptions. This will lead to a better end result and a happy experience – something we strive to provide all our clients!

Vox: The surprising pattern behind color names around the world: https://www.youtube.com/watch?v=gMqZR3pqMjg