The Marriage of Social Media and Television

While some say the digital age is killing off traditional media, I think it’s more realistic to say that at this point, digital has married traditional (specifically in the case of social media and television). What do I mean by this? TV has become an experience rather than activity, largely due to social media. What do you do when your favorite contestant on the Bachelor is sent home? Or when your team wins the Super Bowl? You likely make a Facebook status or tweet about it. You share your feelings about what’s happening on television and others engage with you about it. The concept of “live tweeting” initiates a real-time conversation and ultimately a sense of community among those who are tuning into the same programming. 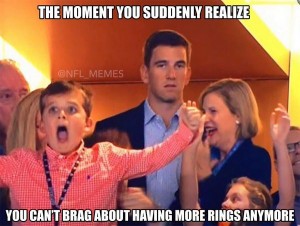 Text posts, pictures, and memes go viral almost instantly during live televised events, many of which provide some serious entertainment value (see Eli Manning meme circa 2016 Superbowl above).  Trends in media are changing and some channels are seeing a decline in consumerism.  However, I don’t think television has much to worry about in the upcoming years.  Social media may just be a crutch for now, but it’s certainly embellished the way we watch television today.