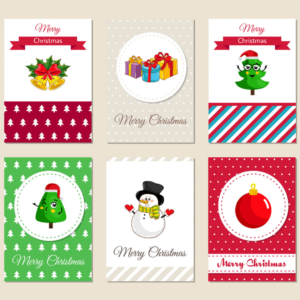 Marketers like to go above and beyond for Christmas campaigns — from multi-million dollar TV ads to total rebranding designs to match the holiday season. While that’s all fine and dandy, but the true hallmark of Christmas (no pun intended) is the Christmas card. It’s simple yet effective. For decades, Christmas cards have been an essential part of the holiday season in the United States. Millions of cards get sent every year as a simple holiday greeting and a testament of goodwill — but how did the Christmas card come about? Why is it an ongoing trend? Well, Transformation Marketing is here to tell you all about these interesting Christmas card facts!

Henry Cole, a civil servant and inventor, was instrumental in improving Great Britain’s postal service. With his help, the Uniform Penny Post came into existence in 1840. The Penny Post allowed senders to mail a letter or card anywhere in the country for only a penny. By the time Christmas rolled around in 1843, everyone was sending letters — and to one person in particular — Henry Cole. Cole received stacks on stacks of letters and had no idea how to respond to them all. Not answering mail was not an opinion as that was considered extremely impolite in Victorian England. His solution: He approached his artist friend, J.C. Horsely, and asked him to design an illustration of a family celebrating the holiday around a table with a generic greeting of “A Merry Christmas and A Happy New Year To You” — and then made one thousand copies. He added a salutation of “TO: _____” to personalize all of his responses and then sent them in the mail. This was the first Christmas card.

The Rise of Christmas Cards

Many of Henry Cole’s friends realized how much time his generic card saved. Within a few years, they too copied his idea and were sending mounds of generic cards at Christmastime as well. However, it wasn’t until about twenty years later that his invention really caught on, when it did, it became an integral part of the holiday tradition in both Great Britain and the United States.

It’s believed that the first Christmas card sent in the United States was in 1875 by Louis Prang, a Prussian immigrant with a print shop near Boston. His card was much more simple and subtle compared to Cole’s card, it had a small painted flower with the words “Merry Christmas.” By the late 1800s, people found appreciation in the quality and artistry of cards, which lead to massive opportunities within the card-making industry.

The Beginning of Hallmark

Hallmark is the oldest and largest manufacturer of greeting cards in the United States. Joyce Hall, along with his brother Rollie and William, published its first holiday card in 1915 under the name of The Hall Brothers. About a decade later, they changed the company’s name to Hallmark and soon adopted a new format for cards — 4×6 cards, folded once, and inserted in an envelope. Along with the folded format, festive holiday illustrations and hopeful religious scriptures paired with cliche messages inside become widely popular. So much so, that this has remained the industry standard for over a century.

As marketers, we often want to create the “next big thing,” but sometimes sticking with tradition has the most impact. Pick out a card, pick up a pen, and wish those you care for a Merry Christmas and Happy New Year!