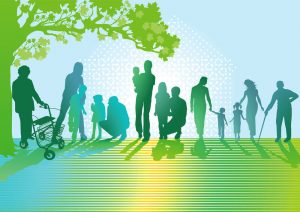 In part one of this two-part blog series, we discussed the characteristics of the current generations and marketing strategies for each. We’ll continue this conversation and address the two generations most prominent in today’s workforce: Generation X and Millennials.

Stuck between the disruptive and huge Baby Boomer and Millennial generations, Generation X is often overlooked [1]. So let’s give this generation some love.

Generation X is extremely powerful, as they start to age in the workforce and take over high-level jobs. They entered the workforce when the internet was made public and was forced to adapt, which set them up to transition smoothly into the digital age.

This generation was born during the Vietnam War, saw multiple recessions early on (1970, 1974, 1980), and experienced the Great Recession during the height of their careers. Many were home buyers at the time of the Great Recession, which acted as their last straw, making this generation more price conscious than the others. Because of these setbacks, this group tends to be self-reliant free agents rather than dependent workers—Gen X-ers have founded 51 percent of today’s startups [2].

Since the generation is overlooked in favor of Baby Boomers and Millennials, they also tend to feel overlooked by brands as well— 54 percent feel they are constantly ignored by brands. In addition, their free agency makes Gen X-ers more reliant on internet research, as 72 percent use the internet to research businesses. Since this generation is sandwiched between the creations of television and the technological era, they tend to favor a blend of media types. 81 percent have Facebook accounts, 48 percent listen to the radio, 62 percent still read newspapers, and 85 percent watch traditional television.

The values of this generation split, based on age. Most older Gen X-ers have kids in college, or fresh out of the house, while the younger members are raising school-age children [2]. The generation is at a pivotal point in their careers, as they are either reaching their peak and preparing for retirement, or are a few years away from their peak and looking to climb the ladder of prominence. Due to their point in life, younger Gen X-ers value success and family and are driven by both. On the other hand, older Gen X-ers enjoy themes of family and safety, as many are looking after an aspiring young adult or aging parents.

Children of Baby Boomers and older Gen X-ers, the Millennial generation is the biggest of the two. Millennials grew up during a period of immense change; they saw 9/11, increases in diversity, social awareness, and the tech boom. This generation is characterized as open-minded, self-reliant, and self-absorbed.

Though Millennials may not like it, they still hold similar characteristics with other generations

Marketing for Millennials differs from previous generations. They grew up with the internet and know how to use it for research, which also makes the generation more impatient than others. Traditional strategies, such as television and radio, are poor means of marketing toward Millennials.

Millennials are the most brand loyal generation today. 5 of 6 connect with companies on social media. They are 7 times more likely to give their personal information to a trusted brand. And, 60 percent say they’ve held brand relationships for 10+ years [4]. 1 in 3 use ad blockers, meaning branding is vital if a company wishes to gain the generation’s attention and skirt these blockers. They tend to be cord-cutters and operate under schedules on their own time—they do not have to sit down and watch their favorite show at 8 p.m. sharp when they have Netflix & Hulu. Targeting Millennials based on their personal schedule, which may vary, is the best way to reach them. This is not to say that all Millennials act like this, or that older generations are not cord-cutters, Millennials are simply more inclined to do so.

Targeted ads on social media, YouTube, or Google Ad Campaigns are just a few examples of effective Millennial marketing (for example, I am a cord-cutting Millennial, and I’ve been hooked multiple times with a Hulu ad that was specifically targeted toward me. I even know the sole purposes of these ads were to target me, but the information provided was meaningful). When they do land on your website, make sure there is an abundance of information for them to sort through and the website is fast to accommodate consumer impatience.

The newest generation, Generation Alpha is only 7 years old at most. While they’re still young, they still influence their parent’s buying decisions. A Hotwire survey found that 81 percent of participants said their habits and needs of their children influenced their last purchase and also found that “27 percent of parents across the globe ask their kids’ opinion before buying technology.” [5]

If we’ve learned anything from the past decade, it’s that the digital age is less of a boom and more of the dawn to a new era, as new technologies and algorithms accelerate innovations to lightning speeds. Like the generation before, Alpha’s are likely destined to be the most technologically advanced generation—they were born in the middle of mass innovation.

While we do not have much behavioral data on Generation Alpha, other than generalized behaviors, one thing is for certain about this group—their lives will be more digitized than any generation before, and marketing will follow suit.

Previous StoryMarketing Strategies by Generation: Part I
Next StoryWhat is WordPress?