Ben and Jerry’s just released their new ice cream called the “BRRR-ito.” This is a combination of ice cream wrapped with chocolate in a waffle cone shell – like a burrito. They did this on 4/20 in honor of what some people consider to be the ‘high-holiday’ for marijuana smoking.

“The company announced the new product in a parody of Apple’s legendary “1984” commercial, which is widely considered the greatest commercial in Super Bowl history.”

The ad begins showing rows of people looking very bored, staring at a TV screen as if they are entranced. On the screen, an ice cream sandwich is floating around. The beginning is similar to “1984,” when the commercial begins with a group of men watching a screen entranced by a man talking.

It then shows a shorthaired blonde woman running down the hall towards them. But instead of holding a Sledgehammer similar to ‘1984,’ she is holding an ice cream burrito. 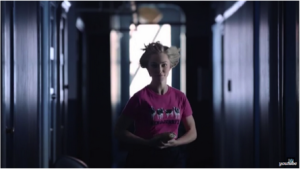 After reaching the room, the woman throws the burrito into the screen. In the 1984 version, she throws the sledgehammer into the screen. It then ends with text reading, “On April 20th, Ben & Jerry’s will introduce the BRRR-ito. And you’ll see why 4.20 will be exactly like ‘4.20.'” This is similar to the wording of the original commercial talking about 1984.

The new ice cream “BRRR-ito,” will have a cone shell wrapped around two scoops of ice cream and covered with fudge and cookie crumbs. Overall, the commercial is a good rendition of the original Apple commercial. I think it is a very interesting idea that they decided to play off of the 4/20 theme when launching their new product.

Here at Transformation Marketing, near Lincoln, Nebraska, we can produce commercials to launch your new products. We have a full production studio at our office and can shoot on site videos. These videos can be made for online and traditional watching and we can even place these spots for you. Plan your next video with Transformation Marketing today!