Making a national brand like Papa John’s feel like a local restaurant can be a challenge. The local owner wanted to separate himself from corporate persona and help local consumers understand that even though they are a national brand, they are locally owned and have a deep passion for their community.

As a franchise, they don’t have the ability to create new products, add unique toppings, or even create specials that veer from the national campaign because they are so heavily advertised from the national media buys.

Given that corporate runs the radio and TV messaging, we knew using social platforms were going to be our best option. We decided to take a Papa John’s pizza box and hide it in iconic locations around Lincoln and Omaha. Then, we took pictures of the boxes, revealing a small portion of the iconic location. We posted one photo per week and asked users to guess where the pizza was hidden. Participants that correctly guessed the location were entered into a random drawing to win a free pizza party pack from Papa John’s. There was a winner from each market (Omaha and Lincoln). 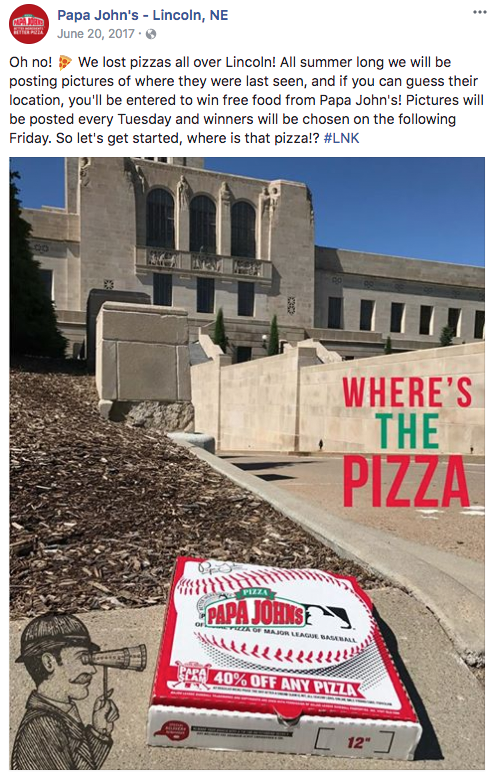 Response to the contest was far better than we imagined, creating a reach of over 100,000 people! People who played were quite specific on locations, showing their passion for the community as well. Papa John’s got an extraordinary amount of exposure for the cost of a couple pizzas a week.

The success of this original contest paved the way to additional ones. Give the fans what they want, right? Once the Nebraska Husker football season started we launched a “Where’s the Ticket?” contest for the first three home games. Users were challenged to guess the locations of tickets hidden on campus. Between the Lincoln and Omaha pages, we reached 21,326 users, got 458 comments, and 103 reactions. It is true, Huskers are fanatic for their football and we found they are also fanatic for Papa Johns! 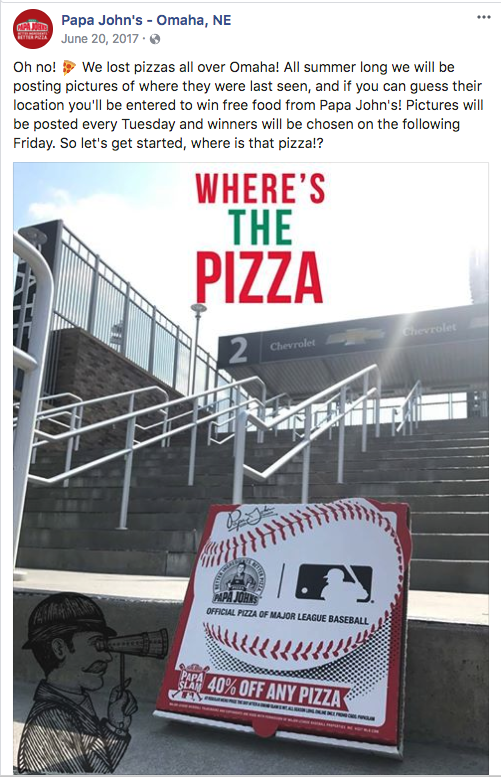