NBC – Thanks for Nothing Campaign

Nebraska Bank of Commerce (NBC) is a local bank in Lincoln, Nebraska with two branches, one of which is blocks away from the University of Nebraska-Lincoln. Even with their convenient location, they find it hard to capture college students as clients, especially with the partnership UNL has with another local bank. Competitor banks are not allowed on campus for any reason, including UNL’s big outreach events such as “Big Red Welcome Week” for new freshmen, or “Get Rec’d” for all students, hence missing out on valuable opportunities to meet with individuals, groups, and clubs.

One of the primary objectives of their marketing campaign was increasing college student accounts, particularly at their downtown location. They wanted to show that they understood the youth market, and could be the bank that relates and grows with them through life’s milestones. Unfortunately, banking is not glamorous to most young people. Most banks do not take the steps to make their brand more appealing to young people, so we had the opportunity to creatively blaze that trail for them.

Nebraska Bank of Commerce allows their patrons to make 30 foreign ATM withdrawals every month, charging them nothing to do so. This feature surpasses their competition and thus launched our idea for the #ThanksForNothing campaign. We decided to focus on commonly shared experiences that had a negative impact on many college students and turned those into a positive. While the pizza delivery man helped them gain their freshman 15, campus security ticketed them for parking in the faculty lot when they were running late, or even when their dog ate their homework, the “nothing” NBC was charging them was of great benefit. 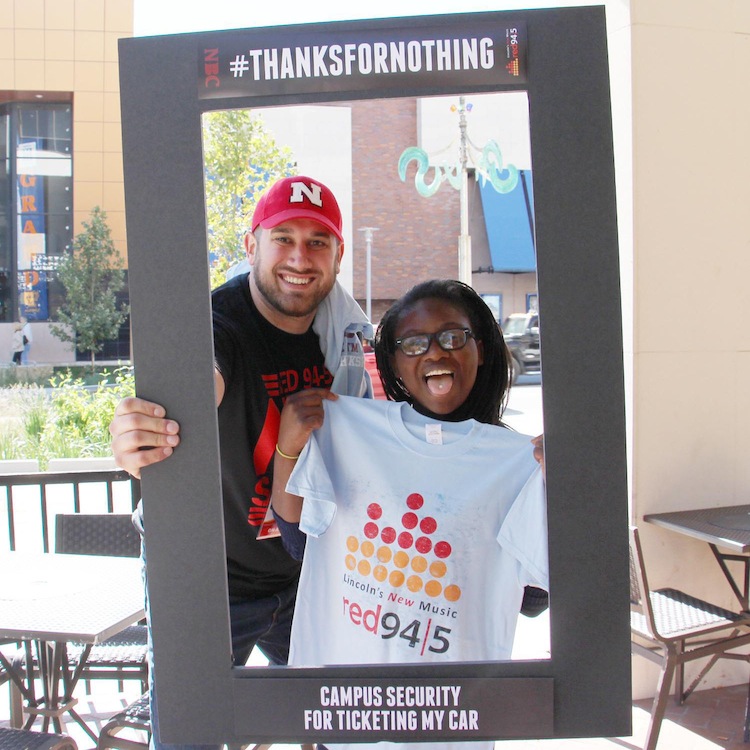 Getting around the campus restrictions proved to be a little more challenging. We put our creative hats on again and partnered with a local radio station that targeted UNL campus and students in programming and “boots on the ground” outreach. The radio station’s DJ was a big Snapchat user and had a great following. We made t-shirts, brochures, and picture frames tagged with #ThanksForNothing. The frames featured interchangeable strips that students could write on, making sarcastic comments about what they were thankful for. Once a month during the three-month campaign, the DJ went downtown and gave out a free meal on behalf of NBC, which was promoted through his Snapchat account, as well as on the air. Photos of students with the picture frame were posted on NBC’s social media and promoted to college students, as a follow-up to the one-day downtown event to lengthen the reach. Ads voiced by the DJ also ran throughout the three months leading up to winter break.

The brochures were designed with a grunge look that would appeal to students. We made light of all the legal disclaimers that were required to be placed into the brochure by adding some of our own that were light-hearted and humorous. 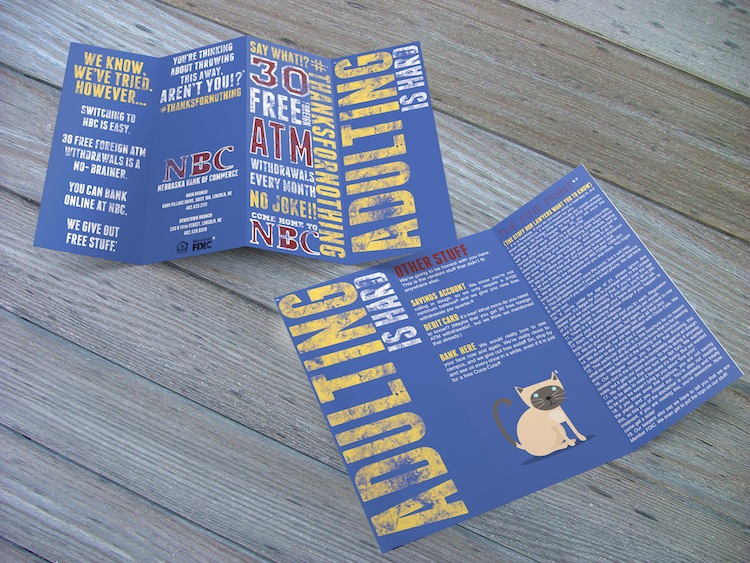 The campaign worked very quickly. Shortly after the first downtown event, NBC received their first student account from the campaign. In addition, during those three months, they received a great deal of response from these posts on their Facebook page: