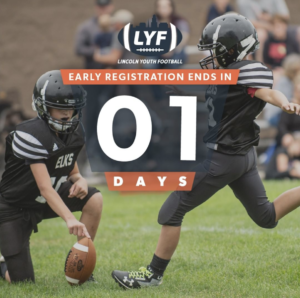 Before working with Transformation Marketing in 2018, Lincoln Youth Football’s registration numbers were declining alongside the rest of the country. Their participation continued to drop until we stepped in and increased their marketing efforts. We began by rebranding them and then continued to push registration on their social media and website.

Before we began working with Lincoln Youth Football their numbers were constantly going down. In 2018, we saw a record high registration of 924 athletes! This was beyond what we could have imagined, and we didn’t think we would be able to top it the next year.

In 2019, we surprised ourselves and reached another record high registration of 975! Between these two seasons, we saw a growth of 800 Facebook followers on their page, which was a 53% increase with over 16,000 interactions on their Facebook platform. Twitter saw a 58% increase during this time as well as gaining 62 new followers and 142 page interactions. Lincoln Youth Football also had a growth of 300 followers on Instagram or a 103% increase during 2019 reaching over 41,000 people!

We are so excited to announce that Lincoln Youth Football reached another all-time high registration of over 1,000 players for their 2020 season even with COVID-19 still being a concern. We were able to do this by pushing registration on social media and with email campaigns.